A memorial service will be 2:00 PM, Saturday, May 7, 2022 at the Lind Family Funeral Home in Alexandria with Rev. Patrick Sullivan officiating. Music is provided by Kim Byrne. Charlie's service will be livestreamed and can be viewed on his obituary page on the funeral home's website.

Visitation will take place one hour prior to the service.

Charles John Basch was born March 20, 1926, in South St. Paul, Minnesota to Charles Joseph and Ella (Breskamp) Basch.  He excelled in high school sports and lettered in baseball, basketball and football.  He joined the US Navy and proudly served in the Pacific Theater on the attack transport USS Burleigh from 1944 to 1946.  After his honorable discharge, Charlie played minor league baseball in Fort Lauderdale for the Florida International League where he earned the opportunity to play baseball in Cuba. He later enrolled at Concordia College in Moorhead where he played football. He met and married Winifred Christiansen in 1949, and graduated from college in 1950, with a degree in Biology.  Charlie taught and coached high school sports in Wahpeton, Moose Lake and most notably at Alexandria High School.  While at Alexandria, Charlie was head coach for the Cardinals baseball and football teams.  He then returned to coach for Concordia College and eventually St. Cloud State University.  While at SCSU, Charlie taught for 23 years, was assistant football coach and head hockey coach from 1968-1984.  Charlie was recognized for his achievements by being inducted into the South St. Paul, Concordia College and St. Cloud State Athletic Halls of Fame.  He married Kay Vance in 1988, and embraced having additional family to share his time and talents with.  Kay passed away in 2021.  Charlie had many interests but mostly enjoyed golfing, attending hockey games, sharing good will and walks on the beach in Naples,Florida.

He was preceded in death by his parents and daughter, Margaret 'Margie' Elizabeth Basch.

To plant memorial trees or send flowers to the family in memory of Charles Basch, please visit our flower store.

Your condolence is awaiting moderation. Once approved it'll appear in the guestbook.

A candle was lit in memory of Charles Basch

Charlie Basch was my beloved teacher, coach and friend in Alexandria from 1959-64. He was a kind man and also one of a kind. I reconnected with

Charlie Basch was a beloved teacher, coach and friend to so many at Jefferson High School in Alexandria. I knew him from 1960 to 1963 and reconnected with him in 2003 through a classmate, Roger Melaas, who lived and taught in St. Cloud when Charlie was hockey coach. I’ve called Charlie since then from the State of Washington and have been so encouraged by his kindness and care. He loved to reminisce about the faculty and students at Jefferson and the memories of when he played for the Clippers. He was one of a kind and memories of him will last the rest of my life. The last time I talked with him was on his 96th birthday and his last words were, ‘Thanks for remembering me.’ Bless, bless, bless Coach Charlie’s life and memory.

1957 to 1961 Alexandria High School baseball. I loved playing for him. Very good man.

I played football and baseball for Charlie in H.S. at Alexandria and in college at Concordia. Chairlie was the dad I never had. A great athlete and coach and truely a wonderful and winsome man.
Rest in peace Coach Charlie--you had a great run and influenced so many for good!

We were co-workers with Charlie at St. Cloud State and remember him with fondness. He was kind, friendly, and a pleasure to be around. And what an athlete he was! Noel Olsen, another co-worker, used to say that Charlie was in the all-time top 10 athletes from Minnesota, and Noel knew the history of Minnesota athletes well. We send our deepest sympathy to each member of Charlie's family.

Basch family members, we are sad to hear of Charles passing. May you find peace in this time of sorrow, may Christ the Resurrection and life, send comfort to your heart. He was one of my favorite teachers at SCSU during my undergraduate and graduate courses and made each student he had feel he/she was most important. He loved serving others in his coaching and teaching; he was so gifted for his chosen profession. Coach Basch was a friend to all and will be missed and never forgotten. May God be with him in eternal life. Amen

What a terrific coach and wonderful, and how lucky were we to have him in our lives. What a joy, too. to watch him play with the Clippers and what a thrill in was to stand on the sidelines with him on game days.

What a terrific coach and a wonderful man. It was such a joy to watch you play with the Clippers and stand on football sidelines with you was an amazing thrill for a young guy. Thanks for being in our life coach.

Thinking of all the Basch family during this time. Our families go back many years and we have lots of fun memories of those times together in Moorhead when Charlie was coaching at Concordia. The friendship began even before that as Charlie and my dad Sonny were college roommates and teammates at Concordia. Charlie is also my brother Chuck’s godfather.
We will all miss Charlie - especially his big hugs!
Blessings to you all.
Penny Gulsvig Burgau

A photo was added for Charles John Basch 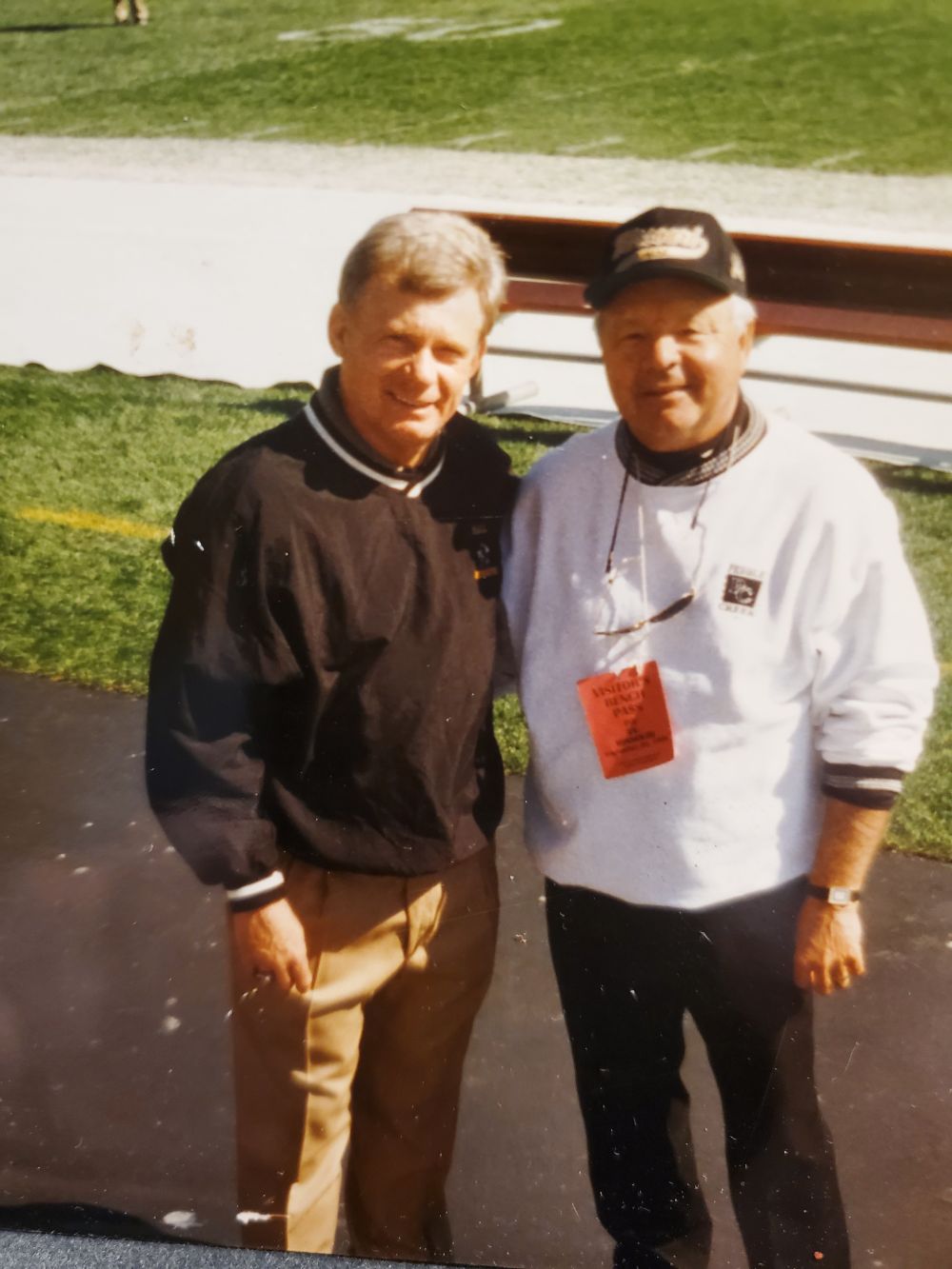